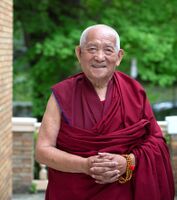 Professor Geshe Yeshe Thabkhe was born in 1930 in Lhokha, Central Tibet, and became a monk at Drepung Loseling Monastery at the age of thirteen. After completing his studies in 1969, Geshe Thabkhe was awarded the highest academic degree offered in the Geluk school of Tibetan Buddhism. Since 1972, he has served as professor of the Indian tradition of Buddhist philosophy at Central Institute of Higher Tibetan Studies, the only Tibetan university in India. He has also served as a lecturer at the School of Buddhist Philosophy, Leh, Ladakh, and at Sanskrit University in Sarnath. His works include Hindi translations of Tsongkhapa’s Essence of Good Explanation of the Definitive and Interpretable and Kamalaśīla’s commentary on the Rice Seedling Sutra. He was the primary traditional source for the English translation of Tsongkhapa’s Great Treatise on the Stages of the Path. He is a resident teacher at the Tibetan Buddhist Learning Center in New Jersey and has also taught at Drepung Loseling in Georgia, Jewel Heart in Michigan, and Sravasti Abbey in Washington State. (Source: Wisdom Publications)