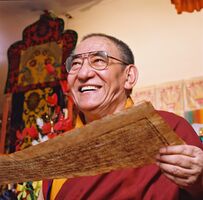 Sermey Khensur Rinpoche Lobsang Tharchin was born in Lhasa, Tibet in 1921. He entered the Mey College of Sera Monastery at an early age and proceeded through the rigorous 25 year program of Buddhist monastic and philosophical studies. Upon successful completion of the public examination by the best scholars of the day, Rinpoche was awarded the highest degree of Hlarampa Geshe with honors. In 1954, he entered the Gyumed Tantric College, completed its course of study under strict monastic discipline, and shortly afterwards attained a high-ranking administrative position.In 1959, Rinpoche escaped to India along with His Holiness, the 14th Dalai Lama, Tenzin Gyatso, and tens of thousands of other Tibetans. Actively involved in Tibetan resettlement, he compiled a series of textbooks for a Tibetan curriculum to be used in refugee schools and also taught in Darjeeling, Simla, and Mussoorie.

In 1972, Khen Rinpoche was chosen by H.H. the Dalai Lama to come to the United States to participate in a project involving the translation of Buddhist scriptures. Upon its completion, he was invited to serve as the Abbot of Rashi Gempil Ling Temple in New Jersey, a position that he held until his passing, on December 1, 2004. In 1975 Rinpoche founded the Mahayana Sutra and Tantra Center in Washington D.C., with a branch in New Jersey, as well as, the Mahayana Sutra and Tantra Press. Over the years he has offered a vast range of Buddhist teachings.

In 1991, Khen Rinpoche was asked by His Holiness the Dalai Lama to serve as Abbot of Sera Mey monastery in south India. After a brief appointment there, he returned to the United States, where he continued to teach and direct a number of projects dedicated to the restoration of Sera Mey Monastery in India and to the flourishing of the Mahayana Buddhist Dharma in the West unitl his passing in December of 2004. Mahayana Sutra and Tantra Center of Washington, DC