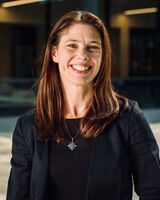 Bronwyn Finnigan is a senior lecturer in the School of Philosophy, RSSS, at the Australian National University and an early career research fellow with the Australian Research Council. She works primarily in metaethics, moral psychology, and philosophy of mind in Western and Asian philosophical traditions and is currently working on two related research projects. The first investigates the nature of practical rationality involved in skilled action taken as a model of moral agency. The second examines Buddhist moral psychology and the meta-ethical grounds for rationally reconstructing Buddhist ethical thought. Bronwyn is a member of the Cowherds who authored Moonshadows: Conventional Truth in Buddhist Philosophy (Oxford), and has recently published articles on Buddhist arguments concerning animal welfare and vegetarianism (2017), idealism (2018), and the reflexive awareness of consciousness (2018). (Source: Readings of Śāntideva's Guide to Bodhisattva Practice, pg 285.)

An important term for the Yogācāra that refers to a consciousness of consciousness itself, or how one knows that they know something. It was a hotly debated topic that was disputed by followers of the Madhyamaka. In Tibet it would later become a common Dzogchen term, though with the entirely different meaning of one's own innate awareness (rig pa), a crucial concept in the Dzogchen teachings.