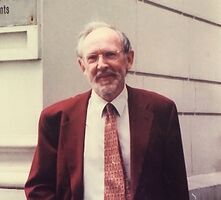 EMMERICK, RONALD ERIC, (b. Sydney, 9 March 1937; d. Hamburg, 31 August 2001), distinguished Australian scholar of the ancient civilizations and languages of Iran, India, and Tibet. He was the only son of Eric Steward Emmerick (1905-67) and Myrtle Caroline Emmerick, née Smith (1908-72). Prompted by his keen interest in languages and their history, he studied Latin, Greek, French, and German at Sydney University (1955-58), where he also attended an unofficial Sanskrit course offered by the classicist and linguist Athanasius Pryor Treweek. He took his B.A. degree with First Class Honors and received the University Medal for Classics with a thesis on “Mycenaean Morphology.” Subsequently he was appointed as a teaching fellow in the Latin department in 1959. His choice to write his thesis on Mycenaean Greek, whose script, Linear B, had only been deciphered in 1953, attests to his intellectual curiosity and shows how he was attracted by little explored subjects whose study could open up new vistas and deepen our knowledge of history in general. His chosen field of research, however, to which he devoted most of his life, was to be the Khotanese language and texts. He first heard of this language when, in Sydney, at the age of twenty-two, he read Harold Walter Bailey’s 1938 inaugural lecture, “The Content of Indian and Iranian Studies.” He was so impressed by this lecture that he decided to study Khotanese with Bailey at Cambridge University. There, he first completed his studies in Classics and was instructed in Iranian and Indian studies by Bailey, receiving the Brotherton Sanskrit Prize, the Bhaonagar Medal for Sanskrit and the Rapson Scholarship. Then, in the years 1963-65, he wrote his doctoral dissertation entitled "Indo-Iranian Studies: Saka Grammar" and took his M.A. and Ph.D. degrees in 1965. In the meantime, he had been elected research fellow at St. John’s College, Cambridge (1964-67) and lecturer in Iranian Studies at the School of Oriental and African Studies of the University of London (1964-71). In addition, he taught Sanskrit at Cambridge while Bailey was on a sabbatical leave (1965-66). He subsequently revised and enlarged his dissertation and published it under the title Saka Grammatical Studies (1968f), which became an indispensable reference work for both ancient and modern Iranian studies.