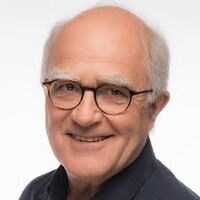 Stephen Batchelor is a contemporary Buddhist teacher and writer, best known for his secular or agnostic approach to Buddhism. Stephen considers Buddhism to be a constantly evolving culture of awakening rather than a religious system based on immutable dogmas and beliefs. In particular, he regards the doctrines of karma and rebirth to be features of ancient Indian civilisation and not intrinsic to what the Buddha taught. Buddhism has survived for the past 2,500 years because of its capacity to reinvent itself in accord with the needs of the different Asian societies with which it has creatively interacted throughout its history. As Buddhism encounters modernity, it enters a vital new phase of its development. Through his writings, translations and teaching, Stephen engages in a critical exploration of Buddhism's role in the modern world, which has earned him both condemnation as a heretic and praise as a reformer. (Source Accessed Jan 12, 2021)

Bio from book flap (Verses From the Center):
Stephen Batchelor is a former monk in the Tibetan and Zen traditions and the author of the national bestseller Buddhism Without Beliefs. Batchelor's translations are known around the world as both definitive and beautifully composed. He has translated Shantideva's A Guide to the Bodhisattva's Way of Life and written several books on Buddhism, including Alone with Others, The Faith to Doubt, The Tibet Guide (winner of the 1988 Thomas Cook Award), and The Awakening of the West (a joint winner of the 1994 Tricycle Award). He lectures and conducts meditation retreats worldwide, and is a contributing editor of Tricycle, a guiding teacher at Gaia House Retreat Centre, and Director of Studies at Sharpham College for Buddhist Studies and Contemporary Enquiry in Devon, England.