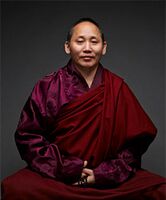 Tulku Tenzin Rigsang was born in Golog, eastern Tibet, near the Mardo Tashi Choling monastery. He became a monk at a young age and was recognized by the dzogchen yogi Yeshe Wangpo as the reincarnation of his own brother Sherab Gyaltsen.

Tulku Rigsang studied with many spiritual teachers including Khenpo Jigme P’huntsog. In India he studied within the Nyingma tradition, at Namdroling monastery and within the Gelug tradition, at Drepung monastery. After having completed the entire curriculum, he moved to Dharamsala, where he received many teachings from HH the Dalai Lama, while also studying English and other subjects.

In 2013, he was invited to the United States by Khentrul Lodro Thaye Rinpoche to be a full-time resident teacher at Katog Rithrod Mountain Retreat Center. Tulku Rigsang was selected by Rinpoche to help teach the dharma in the United States, both formally and by example, as “he is greatly learned, a pure monk, has few desires, is rich with contentment, and is truly humble.”

In 2014, he visited Katog Choling sanghas throughout the US, beginning in March, with a two week residency with the Katog Vajra Ling sangha in Connecticut.

In December 2015, Tulku Tenzin Rigsang returned to the east to continue his studies. (Source Accessed June 16, 2021)

Dzogchen is an advanced system of meditation techniques to reveal the innate state of perfection primarily, but not exclusively, espoused by the Nyingma Buddhist tradition and the Tibetan Bön tradition.

The Geluk tradition traces its origin to Tsongkhapa, who propagated a modified version of the Kadampa lojong and lamrim teachings. It is the dominant tradition of Tibet, having established its control of the government under the figure of the Dalai Lama.