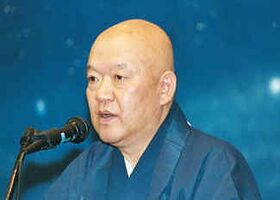 Kosen Nishiyama Roshi is Zen master, teacher and priest, as well as abbot (31st Patriarch) of the Daimanji Temple, a large temple in the northern Japanese metropolis of Sendai with approx. 450 active members. He is also a professor of Buddhology and English at Tohoku Fukushi University. Nishiyama Roshi was born in Sendai in 1939. He received his instruction in Zen in the main monastery of the Japanese Soto School of Zen, the Sojĳi Temple in Yokohama. In 1975 his translation of Dogen Zenji's Shobogenzo was published in English. Nishiyama Roshi also translated Keizan Jokin's Denkoroku into English (published 1994). The German translations of parts of Shobogenzo in Theseus and Angkorverlag are based on these translations. (Source Accessed June 29, 2021)