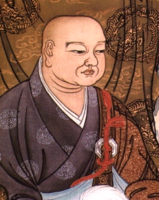 Following Dogen Zenji, the Dharma lamp was transmitted to Ejo Zenji, then to Gikai Zenji, and then to Keizan Zenji, who was the fourth ancestor in the Japanese Soto Zen lineage.

Keizan Zenji was born in 1264 in Echizen Province, which is present-day Fukui Prefecture. His mother, Ekan Daishi, was a devoted believer in Kannon Bosatsu (Avalokiteshvara), the bodhisattva of compassion. It is said that she was on her way to worship at a building dedicated to Kannon when she gave birth. For that reason, the name that Keizan Zenji was given at birth was Gyosho.

At the age of eight, he shaved his head and entered Eiheiji where he began his practice under the third abbot, Gikai Zenji. At the age of thirteen, he again went to live at Eiheiji and was officially ordained as a monk under Ejo Zenji. Following the death of Ejo Zenji, he practiced under Jakuen Zenji at Hokyoji, located in present-day Fukui. Spotting Keizan Zenji’s potential ability to lead the monks, Jakuen Zenji selected him to be ino, the monk in charge of the other monks’ practice.

In contrast to Dogen Zenji, who deeply explored the internal self, Keizan Zenji stood out with his ability to look outwards and boldly spread the teaching. For the Soto Zen School, the teachings of these two founders are closely connected with each other. In spreading the Way of Buddha widely, one of them was internal in his approach while the other was external.

After more years of practice in Kyoto and Yura, Keizan Zenji became resident priest of Jomanji in Awa, which is present-day Tokushima Prefecture. He was twenty-seven years old. During the next four years, he gave the Buddhist precepts to more than seventy lay people. From this we can understand Keizan Zenji’s vow to free all sentient beings through teaching and transmitting the Way.

He also came forth emphasizing the equality of men and women. He actively promoted his women disciples to become resident priests. At a time when women were unjustly marginalized, this was truly groundbreaking. This is thought to be the origin of the organization of Soto Zen School nuns and it was for this reason many women took refuge in Buddha, Dharma, and Sangha.

Keizan Zenji finally moved back to Daijoji, in present-day Kanazawa City, where he became the second abbot, following Gikai Zenji. It was here that he gave teisho on Transmission of Light (Denkoroku). This book explains the circumstances by which the Dharma was transmitted from Shakyamuni Buddha through the twenty eight ancestors in India, the twenty three patriarchs in China, through Dogen Zenji and Keizan Zenji in Japan until Keizan’s teacher, Tettsu Gikai.

In 1321 at the age of fifty-eight, a temple called Morookaji in Noto, which is present-day Ishikawa Prefecture, was donated to Keizan Zenji and he renamed it Sojiji. This was the origin of Sojiji in Yokohama, which is, along with Eiheiji, the other Head Temple (Daihonzan) of the Soto Zen School.

Keizan Zenji did not, by any means, make light of the worldly interests of ordinary people and along with the practice of zazen used prayer, ritual, and memorial services to teach. This was attractive to many people and gave them a sense of peace. For this reason, the Soto Zen School quickly expanded.

Even in the Soto Zen School today, while all temples have zazen groups to serve the earnest requests of believers, they also do their best to fulfill the requests that many people have for benefiting in the everyday world, which include memorial services and funerals.

Keizan Zenji died in 1325 at the age of sixty-five. In succeeding years, his disciples did a good job in taking over for him at Sojiji on the Noto Peninsula. However, that temple was lost to fire in 1898. This provided the opportunity in 1907 to move Sojiji to its present location. The former temple was rebuilt as Sojiji Soin and continues today with many supporters and believers. (Source: Sotozen.com)