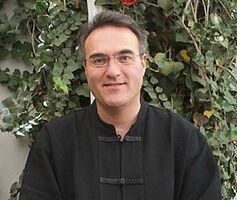 The Casa Tíbet México project is intrinsically linked to the figure of Marco Antonio Karam. In love with Tibetan culture and civilization from a very early age, he is considered one of the most important specialists and disseminators of Tibetan culture and spirituality in the Spanish-speaking world.

After extensive academic training in Tibet, Nepal and the USA, during which he established relationships with some of the most prominent Tibetologists and Lamas of the various traditions of Tibetan Buddhism, in 1988, at the suggestion of His Holiness the XIV Dalai Lama of Tibet and the Tibet Office in New York, founded the Casa del Tibet de México as part of an international project aimed at promoting and defending the Tibetan cause and culture. At the invitation of Casa Tíbet México and the Metropolitan University, the Dalai Lama visited our country for the first time in July 1989 to inaugurate Casa Tíbet México and participate in an international forum of global priorities. (Source Accessed Apr 6, 2021)