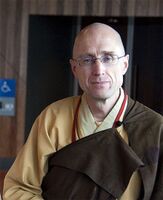 Heng Sure (恆實法師, Pinyin: Héng Shí, birth name Christopher R. Clowery; born October 31, 1949) is an American Chan Buddhist monk. He is a senior disciple of Hsuan Hua, and is currently the director of the Berkeley Buddhist Monastery, a branch monastery of the Dharma Realm Buddhist Association. He is probably best known for a pilgrimage he made for two years and six months from 1977–1979. Called a three steps, one bow pilgrimage, Heng Sure and his companion Heng Chau (Martin Verhoeven), bowed from South Pasadena to Ukiah, California, a distance of 800 miles, seeking world peace.[2][3]

Born in Toledo, Ohio, he attended DeVilbiss High School, Oakland University in Rochester, Michigan, and the University of California at Berkeley from 1971–1976. During his time at the university, Heng Sure was active in theatre. At an early age, Heng Sure learned Chinese from studying the language in high school and by means of his sister, who worked at the U.S. Information Agency. After receiving his masters in Oriental languages, he met his teacher, Hsuan Hua, who would later ordain him in 1976 at the City of Ten Thousand Buddhas, as "Heng Sure" a Dharma name which means "Constantly Real." Heng Sure earned an MA degree in Oriental Languages from the University of California, Berkeley, in 1976 and a PhD in Religion from the Graduate Theological Union, Berkeley, in 2003.

Heng Sure currently gives lectures in Berkeley to the public and through webcasts. Heng Sure also gives lectures in many parts of the world on various subjects, such as the sutras and veganism. He is also an accomplished musician and guitarist.

The disciples of the Buddha who aspire to attain individual liberation or nirvāṇa. The final goal of the Hearers is to reach arhathood, a state in which one has totally eliminated the inner problems of attachment, hatred and ignorance, the main causes rebirth in this cycle of existence. There are four stages of a śrāvaka path including eight phases.