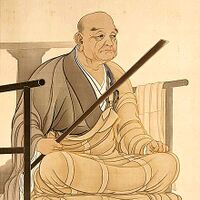 His family name was Ma – Mazu meaning Ancestor Ma or Master Ma. He was born in 709 northwest of Chengdu in Sichuan. During his years as master, Mazu lived in Jiangxi, from which he took the name "Jiangxi Daoyi".

In the Transmission of the Lamp, compiled in 1004, Mazu is described as follows:

His appearance was remarkable. He strode along like a bull and glared about him like a tiger. If he stretched out his tongue, it reached up over his nose; on the soles of his feet were imprinted two circular marks.

According to the Transmission of the Lamp, Mazu was a student of Nanyue Huairang (677-744) at Mount Heng in Hunan. A story in the entry on Nanyue Huairang in the Transmission of the Lamp is regarded as Mazu's enlightenment-account, though the text does not claim it as such. An earlier and more primitive version of this story appears in the Anthology of the Patriarchal Hall which was transcribed in 952:

Reverend Ma was sitting in a spot, and Reverend Rang took a tile and sat on the rock facing him, rubbing it. Master Ma asked, "What are you doing?" Master [Huairang] said, "I'm rubbing the tile to make it a mirror." Master Ma said, "How can you make a mirror by rubbing a tile?" Master [Huairang] said, "If I can't make a mirror by rubbing a tile, how can you achieve buddhahood by sitting in meditation?"

This story echoes the Vimalakirti Sutra and the Platform Sutra in downgrading purificative and gradualist practices instead of direct insight into the Buddha-nature. . . .

Though regarded as an unconventional teacher, Mazu's teachings emphasise Buddha-nature:

[L]et each of you see into his own mind. ... However eloquently I may talk about all kinds of things as innumerable as the sands of the Ganges, the Mind shows no increase... . You may talk ever so much about it, and it is still your Mind; you may not at all talk about it, and it is just the same your own Mind. (Source Accessed July 15, 2021)