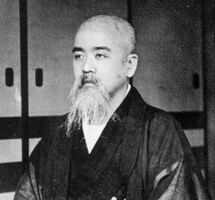 From an early age Kawaguchi, whose birth name was Sadajiro, was passionate about becoming a monk. In fact, his passion was unusual in a country that was quickly modernizing; he gave serious attention to the monastic vows of vegetarianism, chastity, and temperance even as other monks were happily abandoning them. As a result, he became disgusted with the worldliness and political corruption of the Japanese Buddhist world. Until March, 1891, he worked as the Rector of the Zen Gohyaku rakan Monastery (五百羅漢寺, Gohyaku-rakan-ji) in Tokyo (a large temple which contains 500 rakan icons). He then spent about 3 years as a hermit in Kyoto studying Chinese Buddhist texts and learning Pali, to no use; he ran into political squabbles even as a hermit. Finding Japanese Buddhism too corrupt, he decided to go to Tibet instead, despite the fact that the region was officially off limits to all foreigners. In fact, unbeknownst to Kawaguchi, Japanese religious scholars had spent most of the 1890s trying to enter Tibet to find rare Buddhist sutras, with the backing of large institutions and scholarships, but had invariably failed.

He left Japan for India in June, 1897, without a guide or map, simply buying his way onto a cargo boat. He had a smattering of English but did not know a word of Hindi or Tibetan. Also, he had no money, having refused the donations of his friends; instead, he made several fishmonger and butcher friends pledge to give up their professions forever and become vegetarian, claiming that the good karma would ensure his success. Success appeared far from guaranteed, but arriving in India with very little money, he somehow entered the good graces of Sarat Chandra Das, an Indian British agent and Tibetan scholar, and was given passage to northern India. Kawaguchi would later be accused of spying for Das, but there is no evidence for this, and a close reading of his diary makes it seem quite unlikely. Kawaguchi stayed in Darjeeling for several months living with a Tibetan family by Das' arrangement. He became fluent in the Tibetan language, which was at that time neither systematically taught to foreigners nor compiled, by talking to children and women on the street.

Crossing over the Himalayas on an unpatrolled dirt road with an untrustworthy guide, Kawaguchi soon found himself alone and lost on the Tibetan plateau. He had the good fortune to befriend every wanderer he met in the countryside, including monks, shepherds, and even bandits, but he still took almost four years to reach Lhasa after stopovers at a number of monasteries and a pilgrimage round sacred Mount Kailash in western Tibet. He posed as a Chinese monk and gained a reputation as an excellent doctor which led to him having an audience with the 13th Dalai Lama, Thubten Gyatso (1876 to 1933). He spent some time living in Sera Monastery.

Kawaguchi devoted his entire time in Tibet to Buddhist pilgrimage and study. Although he mastered the difficult terminology of the classical Tibetan language and was able to pass for a Tibetan, he was surprisingly intolerant of Tibetans' minor violations of monastic laws, and of the eating of meat in a country with very little arable farmland. As a result, he did not fit in well in monastic circles, instead finding work as a doctor of Chinese and Western medicine. His services were soon in high demand.

Kawaguchi spent his time in Lhasa in disguise and, following a tip that his cover had been blown, had to flee the country hurriedly. He almost petitioned the government to let him stay as an honest and apolitical monk, but the intimations of high-ranking friends convinced him not to. Even so, several of the people who had sheltered him were horribly tortured and mutilated. Kawaguchi was deeply concerned for his friends, and despite his ill health and lack of funds, after leaving the country he used all his connections to petition the Nepalese Prime Minister Chandra Shumsher Rana for help. On the Prime Minister's recommendation, the Tibetan Government released Kawaguchi's loyal Tibetan friends from jail. (Source Accessed Mar 19, 2021)