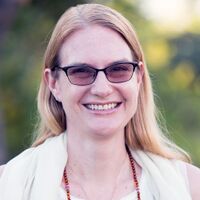 Allison Choying Zangmo is Anyen Rinpoche's personal translator and a longtime student of both Rinpoche and his root lama, Kyabje Tsara Dharmakirti. She has either translated or collaborated with Rinpoche on all of his books. She lives in Denver, Colorado.

She has received empowerments, transmissions and upadesha instructions in the Longchen Nyingthig tradition from Khenchen Tsara Dharmakirti Rinpoche, as well as others of his main students, such as Khenpo Tashi from Do Kham Shedrup Ling. She also received an unusually direct lineage of Do Khyentse Yeshe Dorje’s chod from the realized chodpa Lama Damphel.

After moving to the US with Anyen Rinpoche, she received many other empowerments, transmissions and upadesha instructions in the Secret Mantryana tradition from eminent masters such as Taklong Tsetrul Rinpoche, Padma Dunbo, Yangtang Rinpoche, Khenpo Namdrol, Denpai Wangchuk, and Tulku Rolpai Dorje.

Allison Choying Zangmo works diligently for both Orgyen Khamdroling and the Phowa Foundation, as well as composing books and translations of traditional texts & sadhanas with Anyen Rinpoche, and spending a portion of each year in retreat. Although she never had any wish to teach Dharma in the west, based on encouragement by Anyen Rinpoche, Tulku Rolpai Dorje and Khenpo Tashi, she began teaching the dharma under Anyen Rinpoche's guidance in 2017. (Source: Orgyen Khamdroling)

Expand to see this person's philosophical positions on Buddha-nature.

Refers to something that is taught for a specific reason, rather than because it is entirely true.

Along with Madhyamaka, it was one of the two major philosophical schools of Mahāyāna Buddhism. Founded by Asaṅga and Vasubandhu around the fourth century CE, many of its central tenets have roots in the Saṃdhinirmocanasūtra and the so-called third turning of the dharma wheel (see tridharmacakrapravartana).

Along with Yogācāra, it is one of the two major philosophical schools of Mahāyāna Buddhism. Founded by Nāgārjuna around the second century CE, it is rooted in the Prajñāpāramitā Sūtras, though its initial exposition was presented in Nāgārjuna's Mūlamadhyamakakārikā.

The state of being devoid of that which is wholly different rather than being void of its own nature. The term is generally used to refer to the ultimate, or buddha-nature, being empty of other phenomena such as adventitious defiling emotions but not empty of its true nature.

The state of being empty of self, which references the lack of inherent existence in relative phenomena.

Tsen Khawoche's "meditative tradition" of exegesis of the Uttaratantra; it is one of two major Tibetan traditions of exegesis, both stemming from students of Sajjana.