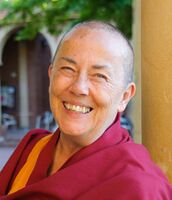 Robina Courtin (born 20 December 1944, in Melbourne, Australia) is a Buddhist nun in the Tibetan Buddhist Gelugpa tradition and lineage of Lama Thubten Yeshe and Lama Zopa Rinpoche. In 1996 she founded the Liberation Prison Project, which she ran until 2009.

Courtin was raised Catholic, and in her youth was interested in becoming a Carmelite nun. In her young adulthood, she trained as a classical singer while living in London during the late 1960s. She became a feminist activist and worked on behalf of prisoners' rights in the early 1970s. In 1972 she moved back to Melbourne. Courtin began studying martial arts in 1974, living in New York City and, again, back in Melbourne. In 1976, she took a Buddhist course taught by Lama Yeshe and Lama Zopa in Queensland.

In 1978 Courtin ordained at Tushita Meditation Centre in Dharamsala. She was Editorial Director of Wisdom Publications until 1987 and Editor of Mandala until 2000. She left Mandala to teach and to develop the Liberation Prison Project.

Robina Courtin's work has been featured in two documentary films, Christine Lundberg's On the Road Home (1998) and Amiel Courtin–Wilson's Chasing Buddha (2000), and in Vicki Mackenzie's book Why Buddhism? (2003). Her nephew's film, Chasing Buddha, documents Courtin's life and her work with death row inmates in the Kentucky State Penitentiary. In 2000, the film was nominated for best direction in a documentary by the Australian Film Institute.

In 2001, Courtin created Chasing Buddha Pilgrimage, which lead pilgrimages to Buddhist holy sites in India, Nepal, and Tibet to raise money for the Liberation Prison Project, an association engaged for the Tibetan cause. (Source Accessed Nov 18, 2020)

Expand to see this person's philosophical positions on Buddha-nature.

The Geluk tradition traces its origin to Tsongkhapa, who propagated a modified version of the Kadampa lojong and lamrim teachings. It is the dominant tradition of Tibet, having established its control of the government under the figure of the Dalai Lama.

Refers to something that is taught for a specific reason, rather than because it is entirely true.

Along with Madhyamaka, it was one of the two major philosophical schools of Mahāyāna Buddhism. Founded by Asaṅga and Vasubandhu around the fourth century CE, many of its central tenets have roots in the Saṃdhinirmocanasūtra and the so-called third turning of the dharma wheel (see tridharmacakrapravartana).

Along with Yogācāra, it is one of the two major philosophical schools of Mahāyāna Buddhism. Founded by Nāgārjuna around the second century CE, it is rooted in the Prajñāpāramitā Sūtras, though its initial exposition was presented in Nāgārjuna's Mūlamadhyamakakārikā.

The state of being devoid of that which is wholly different rather than being void of its own nature. The term is generally used to refer to the ultimate, or buddha-nature, being empty of other phenomena such as adventitious defiling emotions but not empty of its true nature.

The state of being empty of self, which references the lack of inherent existence in relative phenomena.

Tsen Khawoche's "meditative tradition" of exegesis of the Uttaratantra; it is one of two major Tibetan traditions of exegesis, both stemming from students of Sajjana.